The DDD was excited alongside our hosts at the ribbon-cutting ceremony at the U.S. General Services Administration (GSA) Federal Center, marking the completion of construction on a build-out project to relocate the U.S. Customs and Border Protection’s (CBP) San Juan Laboratory. The completed project provides a full-service analytical laboratory equipped with the latest state of the art scientific equipment and capabilities, serving CBP operations in Puerto Rico and the US Virgin Islands, as well as support for law enforcement partners in the Caribbean. “The updated lab provides the much-needed improvements to the operational areas for various lab activities by isolating each of those required needs in different, clearly defined areas within the lab,” said Francis “Fritz” Dutch, director of CBP’s Facilities, Management and Engineering Division.

Some of the features in this cutting-edge facility include Energy Star equipment, LED motion sensing lighting systems, new solar water heaters, and a Building Automated System to monitor energy consumption and avoid excess spending due to the overuse of electricity. Expanded bench and storage space for lab instruments, flammable gases, and liquids. The building also received an updated rooftop air handling unit to accommodate the high volume of airflow that the lab requires for critical equipment and expanded conditioning rooms for textile and organic matter testing. We helped carve out an increased workspace for chemists and we implemented a state-of-the-art security system. 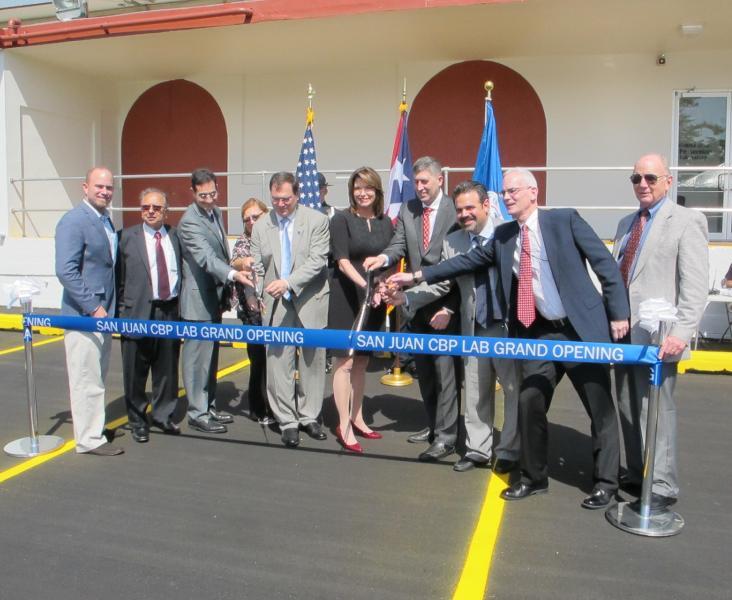 The San Juan Laboratory facility was previously located at the historic Customs House in Old San Juan. The nearly $6 million build-out project at the GSA Federal Center began in May 2016 and was completed in February 2018. “The lab includes exterior upgrades to the façade and electrical service system, as well as the construction of administrative spaces and a state of the art laboratory space for microscopy, digital forensics, drug analysis, latent print processing, petroleum analysis, material conditioning, and organic and inorganic analysis. This new space optimizes CBP’s ability to service Puerto Rico and the U.S. Virgin Islands with this forensic support, Weapons of Mass Destruction interdiction, and trade enforcement,” Dutch said.

Historically, the laboratory has been an integral part of the customs operation. In 1841, the U.S. Customs Service began hiring pharmacists and medical doctors to analyze sugar and molasses imported from the Caribbean to make sure that the commodities hadn’t been doctored to make high-quality products appear to be inferior to avoid duty payments.

Click on the image below to read the original release from the CBP Press Office: